To encourage the empowerment of women and gender equality in India, having a broader vision of using the power of Japanese Comic books to bring a change in Indian society is a vision that can help create a prosperous India with a better future!

Yoshiaki Koga from Kodansha Ltd. shares a vision similar to this; to generate awareness by using Japanese manga’s power and help start social conversations amongst Indian society. In his dream, Japanese manga can enrich and ignite Indian women to continue working towards a socially advanced nation.

Comic books have long ago been accepted as a powerful universal tool in giving voice to complex social issues throughout history. With the language of ‘humor,’ ‘kindness,’ ‘comedy,’ and ‘strong women’ role models, the vibrant stories have the strength to contribute to generating awareness around issues faced by women all across.

Yoshiaki Koga, in an exclusive interview, spoke to Team Super Sugoii about this vision.

Please tell us about Kodansha.

“Kodansha was founded in 1909 and the 110 years old publisher in Japan. The genre of publications includes novels, non-fiction, Children’s books, and comics. More than 2,000 titles of comics and a similar number of books are published every year.”

What manga has Kodansha published?

“Kodansha has published so many manga titles. For instance, Attack on Titan published over 100 million copies from the entire series worldwide. Fairy Tail, more than 60 million copies are printed in the world. A Silent Voice – Koe no katachi in Japanese, Sailor Moon, and Cardcaptor Sakura, and so on. From the classic side, GHOST IN THE SHELL and Akira are pretty famous.”

Koga’s journey in his professional and personal life

Please tell us about your professional life.

“I joined Kodansha in 1989 and served as a journalist and editor at a weekly journal for the first 15 years. I visited multiple countries, including Iraq and North Korea. Then, I launched the COURRiER Japon, an international news magazine, and served as the magazine’s Editor-in-chief for five years.

Post that, I started my professional journey in India in 2010. In 2012 and 2013, I served as a producer of the anime, Suraj – The Rising Star, aired on Colors and Sonic. In 2016, I led a project that promotes a Japanese picture book called “Mottainai Grandma,” collaborating with JICA. This picture book teaches us the importance of environmental education. I have recently produced the project creating anime editions of “Mottainai Grandma” in collaboration with the Ministry of the Environment in Japan. The anime was extended into six languages, including English and Hindi, and released globally for free.”

How have you involved in the country in your personal life?

“It was in 1986 when I visited India the first time. I have been Delhi, Kolkata, Ladakh, Kashmir, and Jaisalmer for three months at the time. Then, I returned in 1997 and 2001, and I stayed in Hyderabad in 2010 for anime production. Frequent visits to the country count over 50 times! I have been almost the entire country, including the Andaman Islands and Ladakh. Last year, I traveled from Gaumukh to Gangasagar by the Ganges.”

What is your memorable experience in India?

“It is running marathons. I have completed the Mumbai marathon in 2014 and 2015. I also joined the trail run at the Great Rann of Kutch! I went through the entire country in multiple ways, such as running, boat, rickshaw, etc.”

at the Mumbai Marathon

at the Great Rann of Kutch

Please tell us the reason why you believe Kodansha’s manga can change Indian society.

“Our manga has four different significant dimensions. I’m elaborating on these points with A Silent Voice.

1. Manga can convey difficult themes in a visual and in an easy-to-understand story.
A Silent Voice is the story about a disabled girl and a boy who bullies her. This manga tells us problems and challenges around disabled people’s circumstances.

2. Manga can appeal to the broader audience, bringing educational elements in entertainment.
Incidents of bullying are sometimes too sensitive to talk about, but manga’s expressions allow us to do.

3. Many mangas have an essence of the slice-of-life.
This uniqueness can easily connect with people’s consciousness and bring changes in their minds and behavior.

4. Compared to books with only letters, manga allows us to share specific scenes
You can quickly spread it around your family, friends, partners, and others. The arts of manga also remind us of a particular scene and talking about it.”

What allows Kodansha’s manga to make such an impact?

“Kodansha features the concept of “Informative but fun” for all our works. It means our USP is to provide educational elements in a fun manner. For instance, a manga called Ichi Efu (1F) in our publications takes you inside the nuclear plant of Fukushima Dai-Ichi, known as ichi efu (1F). The author has worked at the plant and created the manga to share the reality and issues there that we hardly know.”

What is the goal of your vision?

“I am fascinated by the country since I have visited India the first time. Therefore, I wish to help create a prosperous India with a better future using the power of Kodansha’s content. There is a specific theme that I would like to contribute, which is women’s empowerment. I believe India has massive potential for the social advancement of women. In my opinion, there are few works with a strong woman as the main character in Indian movies, books, and things like that. On the other hand, Kodansha has many such works in our manga publications. I hope some mangas from Kodansha can enrich and ignite Indian women to continue working towards a socially advanced nation.”

Do you have any special plans for the Indian audience in the future?

“Kodansha plans to bring officially licensed manga to India in 2021 from more than 2,500 English editions. We want to get our titles that aren’t discovered in the US or Europe but will engage with the Indian audience. We also have many Shojo and Josei manga. Thus, we look forward to having many Indian women manga fans by introducing these mangas with the concept of “Informative but fun” and encouraging women’s empowerment. Besides, I wish to create and publish an original manga with an Indian woman’s main character who can inspire us in the future.

There are some Japanese comics available in India at such as Comic-Con. But most of them are imported and very expensive. Aside, only limited Japanese comics are available on illegal piracy websites. It is a huge problem. That is why we are planning to bring our officially licensed digital manga at an affordable price. I believe a digital platform provides your good experiences staying safe in this COVID-19 situation. Manga Planet will support our vision as a digital manga reading platform. I want to make it happen by Holi next year!”

The need of the hour is ‘gender equality’ and equal opportunities for all. It is high time to act upon it and support projects that have such a profound vision. From individuals to large companies, we all have a responsibility to create a better society and make our nation a better place for generations to come.

To discover more about Mottainai Grandma Project see the link below:
Website

Attack on Titan for Titans to be the world’s largest comic!? 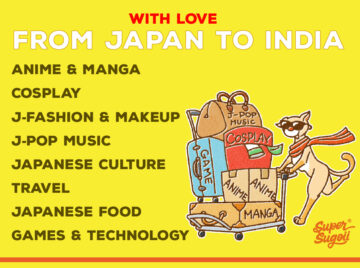